Getting Started: End to End Tests¶

The purpose of End to End "e2e" Tests is to make sure the behaviour of the software, infrastructure, etc., is what we expect. With TF2, you can implement e2e tests to test your Terraform codes after they are deployed to real infrastructures.

In the case of Terraform:

From now on, TF2 is always there for you to test your Terraform-provisioned infrastructures. Not only infrastructures but also everything you managed and deployed by the Terraform, as well as all Terraform data resources. Moreover, TF2 can be integrated into your CD pipelines, and after deploying the new Terraform codes, you can run the tests to test the infrastructure's behaviour in the real world. If something goes wrong or is unusual, you can detect it and rollback the system to the previous working state. With this approach, you can deliver better and more reliable infrastructures and reduce your unexpected situations and downtimes.

Your first End to End test¶

Consider the following Terraform code. It's a standard Terraform code to deploy a Docker container. To test this scenario, you should install Docker on your local machine.

Now deploy the Docker container by running the following commands:

Our desired state about the deployed container:

To automate testing the container status and accessibility, write the following code:

Now, run the test script and see the result. Before running tests, make sure you have installed the tf2project package. Run pip install tf2project to install it on your machine.

Run your TF2 tests with the following command: 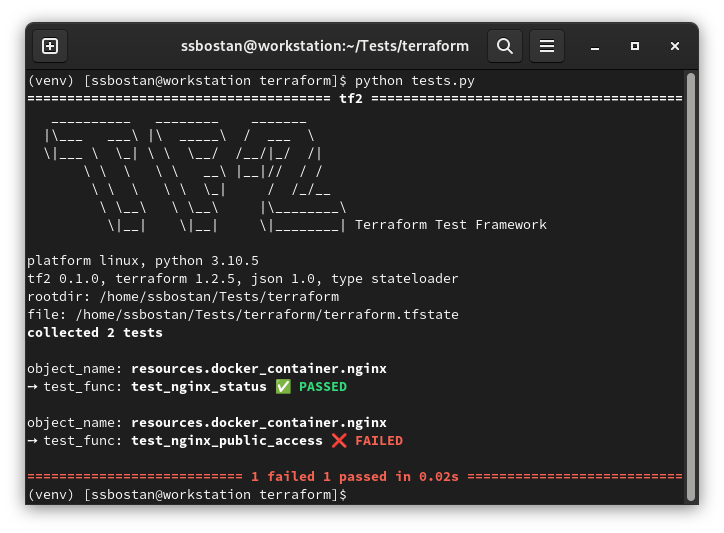 As you can see, the test has failed because the container cannot be accessed through the network as we expected. Actually, this problem happened because of resource misconfiguration, and such problems are out of Terraform's scope, and it cannot detect them.

Now update the Terraform code to the following code, apply it, and run the tests again.

Run the following commands to apply and test: 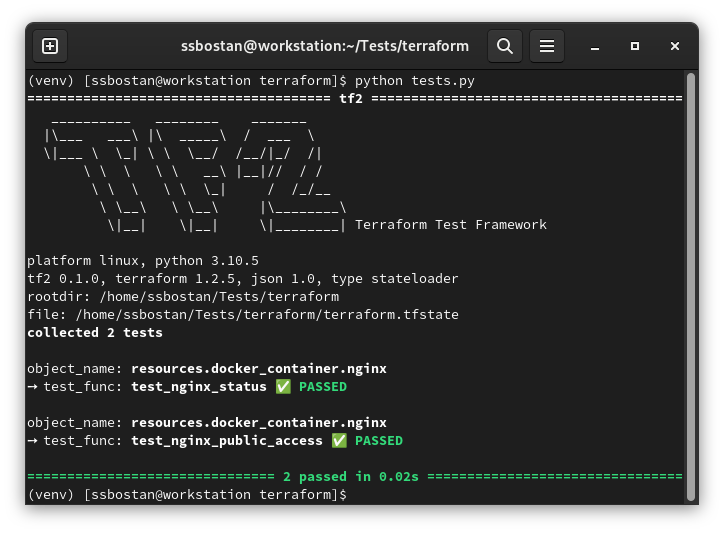 That's it. You wrote your first End to End test with Terraform Test Framework. Now, you can deliver better and more reliable Terraform-provisioned infrastructures.